There are lots of websites claiming for online color blindness test or providing free color blindness test but most of them are not working properly or not giving accurate results. So, here are the top 5 websites that you must refer to for accurate results, Each website in this list have its own special features which I mentioned below, all the websites in this list are totally free of cost, interactive interface and provides comparatively better results: 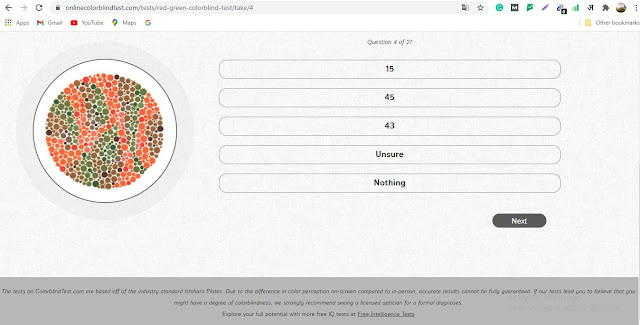 Take the Ishihara Color Blind Test: Click Here
Most people who are color blind don’t even realize that they have some form of color deficiency and that’s because they can still see colors. People with color blindness do not see the world in perfect black and white instead they see things more kind of a yellow or brown hue and part of that because there are many different types of colorblindness.

Every 1 out of 12 men are colorblind and that 1 out of every 200 women have some form of color deficiency.

1. Most of the time color blindness is inherited genetically.

2. Color blindness that results from some toxicities.

3. Some eye diseases can cause color vision deficiency or color blindness.

Probabilities for transfer of color blindness from parents

Studies found that genetics for color blindness is carried on the X-chromosome alone.

Case 1: Father is not color blind, Mother is a carrier

If somebody’s father isn’t color blind but their mother is a carrier for the gene then there’s a 50% chance that her son would be colorblind.

And then there’s a 50% chance that her daughter would become a carrier as well but because it is a recessive gene the daughter will only be a carrier and won’t necessarily be color blind.

Case 2: Father is color blind, Mother is a carrier

If a woman who is a carrier has a child with a man who is color blind there’s again a 50% chance that their sons could become colorblind.

If a woman is color blind and she has a family with a man who is not colorblind all her sons would be colorblind and that’s because she’s only passing on colorblind X chromosomes.

And then her daughter would be guaranteed to be a least a carrier. 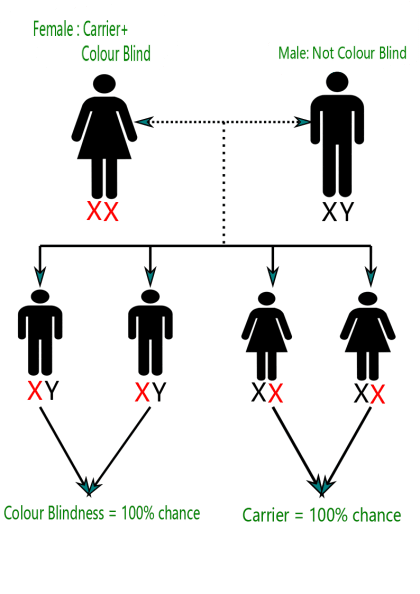 If a color-blind woman has children with a colorblind man then all of their children would be color blind. 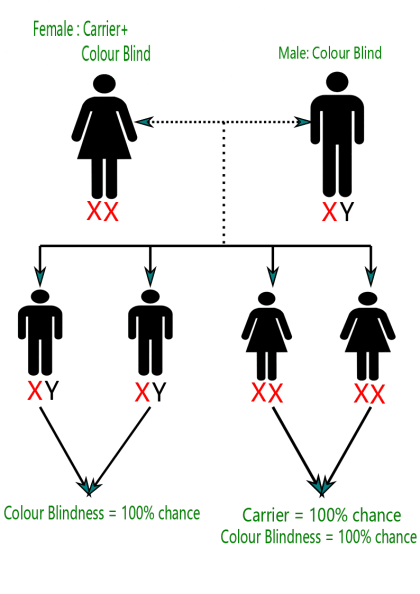 Most of the time colorblindness is passed down through genetics these individuals will have some form of a red-green color deficiency however they usually still can see red and green need to see things as different hues of red and greens compared to somebody who doesn’t have color blindness.

How does Colour Vision work? |  What is Trichromacy/Trichromatic Vision?

Color vision works within the eye because your retina has different cones that perceive the different wavelengths of light. These cones are:

S-cones stand for short-wavelength cones and that pertains to different short wavelengths of light such as blue light.

M cones for a medium range of wavelength of cones are usually in the green color ranges.

L cones for long wavelengths of light which are more of the red colors of the light spectrum.

The person who has all three of these cones functioning well within the retina is known to have trichromacy or what is called trichromatic vision.

The most common type of color blindness is called anomalous trichromacy and that’s where one of these cones in the retina is not functioning as well as the rest of the two cones.

When the L cone is impaired and not functioning properly then this is called protanomaly. In protanomaly, the sensitivity line shifts toward the M cone leaving the difference between the two cones to be very small and hard to tell the difference between the two colors meaning the person having such type of color vision deficiency has trouble seeing red and sees things more as green yellow and Browns.

A person with the M cone Shifting toward the L cones the longer red wavelengths have Deuter anomaly and will see redder normally and have difficulty seeing the green colors.

In this, the S-cone is shifted toward the green and read these people have trouble with blue and yellow colors but it is rare and almost always acquired in some type of eye disease.

All articles on this website including infor­ma­tion, opinions, ref­er­ences, and links are for informatory pur­poses only. The author of eyesdisorder.com doesn’t hand any med­ical advice on the site. You should always con­sult a qualified eye care professional in all mat­ters relat­ing to your eye health or health in general.